Why VR for TOURISM?

As it is early days for VR and AR technologies being used in a tourism context, there are little or none tangible statistics or KPI’s around success metrics e.g. visitor numbers increase, return on investment etc.

That said, Greenlight VR’s consumer report had some encouraging stats about what people (1,300 US consumers surveyed) are looking for when it comes to VR:53% of respondents agreed that the chances are higher to purchase from a brand that uses VR than from one that does not. Furthermore, 71% feel that VR makes brands seem “forward-thinking and modern”. 91% of those who have never experienced VR, felt positive feelings after watching an informational video about VR.

In the summer of 2018, Virtual Reality Ireland created an interactive and innovative gameplay experience combining concepts from Live Action Role Play (LARP), escape rooms and augmented reality. The project was built for a tourism experience to take place at an impressive castle ruin, Manorhamilton castle, in the rural countryside of Ireland.

The app is developed in Unity. We had an array of technical challenges with AR triggering which meant that we ported 4 times to different mechanisms of orienting, anchoring and triggering the content. The journey brought us from using ARCore on Samsung Tab A devices, to Vuforia (but tracking was not stable), to ARKit, where CG elements jittered when users moved, and finally to using Vuforia Fusion on iPad, albeit with its own challenges, which provided us with the robust triggering solution we needed.

The experience was launched on Halloween 2018 (the week of 30th Oct) alongside local actors who will support the experience. In addition, there are plans for a physical audio setup of speakers that will enhance the sites atmosphere providing spatial audio linked to timecodes in the app.

We worked with Hidden Dublin Tours to create a VR experience for their Zombie Bus to trick the audience in to believing there was a hoard of zombies on the bus. The project wasn't feasible to have dozens of actors dressed as zombies coming on to the bus for each trip. They though VR, or more specifically 360 video, may be the answer.

After testing and brainstorming, the solution was defined: create a 360 video filmed inside the actual bus which would map to the viewers physical position on the bus.

As part of the live performance, the characters would tell the audience to ‘Quick, put on your Gas Masks’. Inside the specially created gas mask props, were Oculus Go VR headsets. When the viewer put this on, the 360 video was already playing, so they saw the same bus they were on (in real reality), however then zombies began to come on to the bus, and much to the viewers horror, devour the passengers around them!

Aside from the video production, Virtual Reality Ireland worked with Hidden Dublin Tours to create a seamless experience with both the simultaneous playback across 25 x headsets, as well as the audio which is played on surround sound physical speakers on the headset.

The Zombie Bus experience launched at the Laya City Spectacular festival in July 2019. The feedback from viewers was clear from their screams! The ‘brain-hack’ worked.

The actors performed the dialogue live, mapping to the virtual characters, and also created live haptic responses at particular points in the playback (brushing past passengers, spraying them with water pistols to simulate zombies brushing by and splatters of blood!). The experience is incredibly immersive and therefore exhilarating for any zombie fan!

The Zombie Bus experience will be seen at many more festivals throughout the Summer of 2019 before launching as a tourism Bus experience in Autumn 2019. 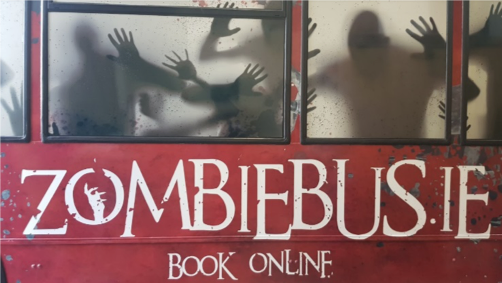 TrainingEventsMarketingWellness
JOIN THE FLOCK
Let's create the future together. Talk to us today about how the powerful new mediums of VR and AR can add-value to your business.
SAY HI